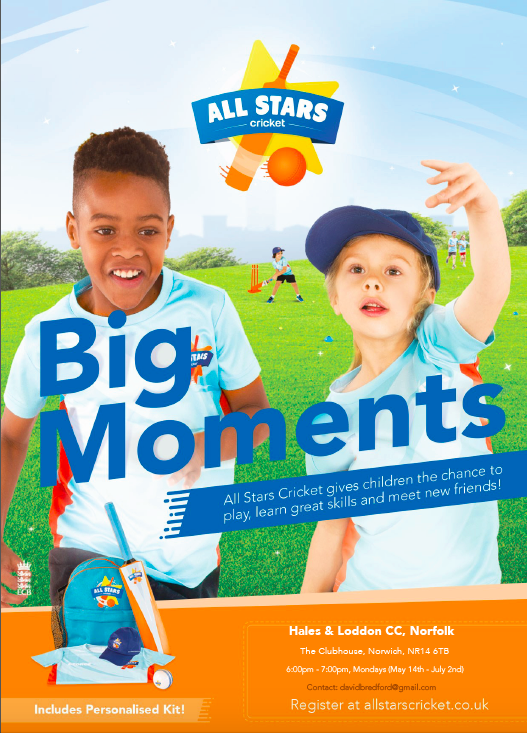 Jack Cook and Auldwyn Lindsay posted half-centuries as Hales and Loddon ended a four-match losing streak with their best performance of the season – a morale-boosting seven-wicket win over promotion-chasing Thetford A.

A run of nightmare batting performances which had seen H&L shot out for sub-100 totals in recent matches was forgotten as the hosts knuckled down to the task against the second-placed visitors, reaching the 199 victory target with nearly five overs to spare.

Milton Lindsay stroked four fours in a promising 18 before advancing down the pitch to Craig Baulch and being adjudged LBW but an opening partnership of 43 in 11 overs with Jack Cook had given the team the momentum they needed. After the departure of Tim Outlaw, bowled by Joel Fernandes for a patient seven, Cook was joined by Calypso cricketer Auldwyn Lindsay and the duo produced an eye-catching array of shots to all areas. Cook was eventually bowled by Zak Wilson for a fine 66, containing 11 fours.

Wary of past batting collapses, skipper Mark Stewart sensibly decided to adopt a low-risk strategy, pushing 10 singles in a row as he supported the free-scoring Lindsay. The duo steered the side past the winning post in the 40th over with Lindsay 72 not out (10 fours) and Stewart unbeaten on 17.

Earlier, after being invited to bat, the visitors had made ominous smooth progress as the vastly-experienced opening duo of Mick Piggott and Darren Newey put on 92 in 21 overs. Richard Cook made the all-important breakthrough with an away- swinger which saw Piggott fall to a fine low catch by wicket-keeper Jack Cook for 35. Anthony Elsom fired in a crafty yorker to remove Newey for 52 as H&L’s bowlers seized the upper hand. Late flurries from Craig Baulch (26) and Mitchell Plumpton (34 not out) took the hosts to the brink of a 200 total but H&L were able to take heart from a much better showing in the field.

Stewart, Will Yates, Richard Cook and Anthony Elsom all took a wicket apiece while left-arm spinner Martin Wells underlined his value with 3 for 27 from his six overs. The 19 extras conceded was a vast improvement on recent profligate showings.

Andy Baker weighed in with a gritty half-century as Hales and Loddon A suffered a five-wicket Norfolk League Division Four South East defeat against Colney at Eaton CNS School.
Baker and veteran Joe Perry showed commendable discipline as H&L dug deep to post a hard-earned 98 total in 36 overs after being put in to bat.
Colney’s experienced opening attack of spinner Simon Carding and left-arm swing bowler Mike Peck gave little away, sharing six wickets and conceding a mere 21 runs between them in 18 highly accurate overs. Peck had Baker caught by Tim Stock for 54 ending an 80-run 4th wicket partnership and later cut short Perry’s defiant vigil on 31 by winning an LBW decision.
Colney did not have things all their own way with the bat as H&L claimed five wickets before the hosts clinched victory in the 29th over.
Skipper Dave Redford (nine overs 1 for 21) and Tom Wilkins (six overs 1 for 19) kept the pressure on in economical opening spells while Joe Perry and Callum Considine also claimed a wicket each. Young Considine took his first wicket for the club in a four-over spell for 20 runs. A smart run-out by Redford accounted for the other wicket.
The hosts were steered to victory by David Whitworth’s unbeaten 30 and 18 from Gary Barker aided by 30 Extras which accounted for almost a third of the total.
PJ Waylands Minibus and Taxis MoM: Andy Baker.

Hales and Loddon returned home empty-handed from their first ever trip to Norfolk Alliance newcomers Denver as they were blown away in windswept West Norfolk.
The visitors were shot out for a paltry 59 as the hosts vindicated their decision to bowl first on a sunny and blustery afternoon. Just 21 overs were needed as H&L’s batsmen succumbed tamely, with only two men managing double-figure contributions.
Milton Lindsay (13) and Jack Cook (20) put on 36 in 10 overs in the only partnership of note before Denver’s bowlers took a grip on proceedings. Paceman Chris Rolfe (seven overs 2 for 19) broke through Lindsay’s defences and had Cook caught, paving the way for father and son Kevin Cornwell and Dan Cornwell to wreak havoc. Kevin Cornwell, a wily slow bowler operating off three paces, took 4 for 12 from four overs of seasoned guile, while his son added three victims for four runs from four overs to the H&L toll of misery. Dan Harper (seven overs 1 for 20) took the other wicket to fall.
On a pitch which played low, but contained few demons, H&L’s batsmen only had themselves to blame for the no-show with application and concentration in short supply.
Denver needed under 13 overs to reach their target as veteran opener Paul Morton hit an unbeaten 30 containing six boundaries and youngster Harvey Wardle weighed in with an unbeaten 25 in a comfortable 44-run second-wicket partnership. Mark Stewart (five overs 1 for 10) claimed the only wicket to fall, bowling opener Gurpal Singh for 16.
Tea was taken after the match before the H&L players embarked on the long trek home, arriving back in plenty of time for the FA Cup final kick-off.

James Rowswell was the man with the golden arm as Hales and Loddon A completed a quickfire demolition job at Winterton. Rowswell recorded stunning figures of eight for 15 from 8.2 overs as H&L made light work of their opponents at Hambrook Oval.
After Sri Lankan recruit Isuru (eight overs 2 for 8) removed the openers, including renowned anchorman Brynley Clarke, to a debatable lbw decision, Rowswell took centre stage. His medium-pace inswinging yorkers seemed laser guided as the next eight wickets tumbled – six of the victims clean bowled. The remarkable haul included a perfect hat-trick as the fourth, fifth and sixth wickets were bowled leg stump, middle stump and off stump. Five of his victims did not trouble the scorers.
On a day when Rowswell could do no wrong, he was backed up by some exemplary fielding, including a brilliant low diving catch from veteran Dave Redford.
The reply was not without incident as H&L, perhaps suffering from over-confidence, contrived to lose four wickets in pursuit of the meagre total. Captain sensible James Buckingham guided his team to victory in the sixth over with an unbeaten 10.
PJ Waylands Minibuses and Taxis Man of the Match: James Rowswell

Martin Wells and Aldwyn Lindsay produced a match-winning century stand as Hales and Loddon recorded their first Norfolk Alliance Division Six win of the season. The duo put on 103 in a crucial fifth-wicket partnership after H&L, chasing a 157 target, were reeling at 37-4 after 13 overs.
Lacing their natural attacking instincts with intelligent restraint the middle-order pair were parted in the 31st over with the score on 140 and the job all but done. Wells, who was was run out by Tosh Keshwala’s direct hit from the deep, had contributed a fine 47 containing three fours and two mighty sixes. Lindsay, aided by the able Tim Outlaw (8 not out) guided the team over the finishing line in the 36th over, for an unbeaten 47.
Stand-in skipper Pete Dye, who had earlier won the toss and invited the visitors to bat on a rain-softened wicket was able to heave a sigh of relief at his side’s recovery. A&B hopes had been boosted by a series of early breakthroughs as Callum Gibson bowled Jack Cook for 13 and had Milton Lindsay caught behind off a spitting delivery for six. Matt Buckingham was bowled by Keshwala for 9 before the luckless Mark Stewart suffered his third lbw dismissal in four innings,  trapped by Gibson for 3. Gibson returned 3 for 34 from his nine overs while Keshwala showed good economy taking 1 for 27 from his eight.
Earlier the bottom-of-the-table visitors had posted a 156 total, which H&L had felt was well within reach given the prospect of a drying surface and improving batting conditions. Wilson had provided the mainstay of the A&B batting with a hard-hit 71 laced with eight boundaries, while Adam Cohen (15) and Oliver Cohen (19 not out) were the other notable contributors.
Young paceman Matt Buckingham spearheaded the H&L bowling effort, with 3 for 16 from nine overs, while slow bowler Will Yates did well to record 1 for 29 from his seven overs after suffering an inner thigh muscle injury after his first delivery. Mark Stewart kept the pressure on with 2 for 17 from his nine overs while Martin Wells (9 overs 1 for 43) and Jack Cook  (6.4 overs 1 for 22) completed  the wicket-taking against the nine-man visitors.
Musker McIntyre joint Man of the Match: Aldwyn Lindsay and Martin Wells

New recruit James Webster scored his second century in as many games but could not prevent Hales and Loddon A from slipping to a five-wicket defeat to Colney.
The South African newcomer, who hit 17 fours in his ton, was eventually bowled by Simon Carding having hit 102 out of the 114 runs on the scoreboard at the time. The returning Will Yates was the other chief contributor to the total, scoring 26 before being caught by Gary Barker off the bowling of Robin Wintle.
H&L, who were put into bat by the visitors, folded tamely to 145 all out in 26 overs with Tim Stock (3-49), Simon Carding (3-38) and Robin Wintle (3 for 21) sharing the wickets.
The visitors were made to battle hard for their victory, taking 41 overs to reach their target. The H&L economy drive was spearheaded by Sri Lankan Isuru (10 overs 0 for 24), Yates (10 overs 1 for 22), Matthew Plummer (10 overs  2 for 31) and Webster (seven overs 1 for 23).
Colney’s victory was achieved courtesy of David Whitworth (28), Simon Carding (17), David Kidner (15), and an unbroken partnership between James France (43 not out) and Nathan Good (10 not out).
PJ Wayland’s Minibuses and Taxis H&L MoM: James Webster